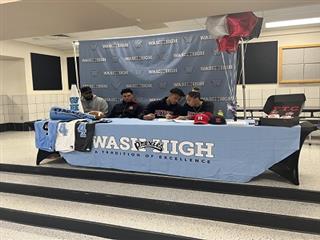 Wash High Senior Davoun Fuse signed his letter of intent on Wednesday, December 21, 2022, to continue his academic and football career for Rutgers University. He was accompanied by his parents and brother at the signing table. Also in attendance were Davoun’s family, friends, teammates, teachers, coaches, and district administration.

Washington School District Head Football Coach and Athletic Director Mike Bosnic congratulated Fuse, and his family. Mr. Bosnic let everyone know how happy he is for Davoun and proud that he will join the illustrious list of great Wash High Athletes to move on to play Division I Football. Bosnic also stated “ Over his past 14 years, Davoun is one of the most talented athletes I have had the opportunity to coach at Wash High.”Although being an athlete in the Big Ten will require a lot of hard work and dedication Coach Bosnic is confident that Davoun’s athletic and academic ability will lead to success at Rutgers and in his future endeavors.

Washington School District Superintendent George Lammay congratulated Davoun and his family on his accomplishments not only athletically but, on his academics. Mr. Lammay stated “ Davoun will graduate early and attend Rutgers University for the Spring 2023 semester which is an accomplishment in its own”.