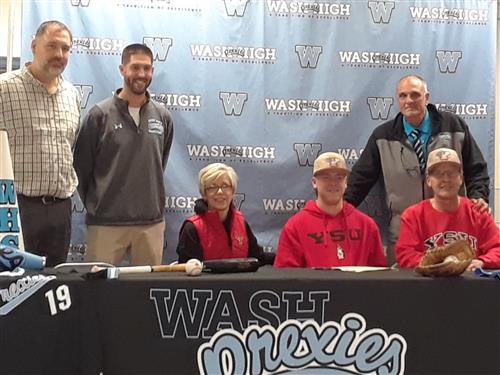 His parents’ support of their youngest’s love for baseball goes back to his toddler days. His mother Amy said he “would play catch and throw baseballs when his older siblings were playing in their sports.” His dad Bryan said that “Michael played ball since he was about 5 in the Shetland league of Washington Youth baseball. He played all the levels through Palomino, and he pitched as a relief pitcher in the PONY League World Series in 2018.”

Washington School District Athletic Director Mike Bosnic introduced and congratulated Shallcross, this year’s team captain, before the signing. “Michael has opened up doors for himself by being a good student and athlete.” Bosnic said, encouraging the other students to work hard and study like Michael to make opportunities for themselves.

Varsity Baseball Coach John Digon worked with Shallcross during the last year and said he was “a dedicated student athlete who goes above and beyond. He’s a very coachable player. He’s a leader and well-respected by his teammates. He is one of our best pitchers and he also led the Prexies in hitting last year.”

Teacher and former coach Anthony Belcastro coached Shallcross his first two seasons in varsity baseball and said, “As soon as he came on the team, he was a leader. He’d be the first at practice and the last to leave.”

Shallcross is currently undecided about his academic major at Youngstown, but he is looking toward engineering. He was impressed by all the options Youngstown had to offer and is “really looking forward to pitching for them.”